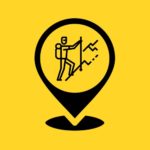 Amazing trail, best hike ever. Views were absolutely amazing for the entire hike. Trail is not well marked and requires a guide or GPS map. The route we took avoided the chain ladders and was replaced by a tough scramble up a gully (and down on the return).

A couple of peaks are accessible once you finish the gully. We continued across the plateau, descending slightly, and followed a path alongside the Tugela River.

The area was in a major drought but thankfully there was still some water flowing in the river. We followed it right to the edge and peered over Africa’s (and the worlds?) second highest waterfalls. No wildlife but for a few birds and very few people. On our return we ran into one group being led by a guide. On a clear day the views are outstanding and seemingly in every direction. It is impossible not to take pictures.