The uKhahlamba-Drakensberg Park is one of KwaZulu-Natal’s two World Heritage Sites. This World Heritage Site is part of a much longer mountain range that stretches some 1,600 kilometres from South Africa’s northernmost provinces to the Eastern Cape. Not only does the World Heritage Site protect a stunning natural mountain wilderness area, it also protects an amazing cultural legacy of ancient rock art in Africa painted by Southern Africa’s earliest inhabitants, the San or Bushmen.

The uKhahlamba-Drakensberg World Heritage Site is also part of a larger collaborative conservation initiative between South Africa and the neighbouring Kingdom of Lesotho called “The Maloti-Drakensberg Transfrontier Conservation and Development Project”.

The Zulu people named the 300-kilometre section of mountain range bordering KwaZulu-Natal and the mountain Kingdom of Lesotho ‘uKhahlamba, meaning “Barrier of Spears”. The early Dutch settlers called them the Drakensberge or ‘Dragon Mountains’. Nowadays, this lovely natural wonderland is referred to by locals simply as the ‘Berg’.

One of the world’s most famous choir schools, The Drakensberg Boys Choir School, is based in the central Berg area and it is a delight to attend one of their regular concerts. Other activities including white water rafting, helicopter flips, visiting vulture restaurants and the Falcon Ridge Birds of Prey Centre in Champaign Valley are also popular. Stop at Thokozisa Mountain Cafe and Indigenous Nursery in the central Berg for lunch, and browse the art and craft shops showcasing local handiwork.

In the park itself, hiking along the footpaths through the mountains, camping in caves or stopping to picnic and taking a dip into the rock pools with tumbling streams and cascading waterfalls are just some of the great pleasures of a visit to the beautiful uKhahlamba-Drakensberg Park. Another is day trekking to explore caves and overhangs containing some of the more than 22 000 individually painted rock art images by the San people who once inhabited these shelters. The Main Caves at Giant’s Castle Reserve offer tours by accredited tourist guides who tell the tales of these ancient places and peoples.

This is definitely a place for photographers. The morning mists swirl around the dramatic mountain peaks and through the cool yellowwood forests. In summer, dramatic mountain storms crash around the mountain peaks and in winter, the snow-capped heights are a sight to enjoy from the cosy warmth of your mountain chalet fireside. It is wonderful just to sit and take in the views of herds of eland, and other smaller antelope making their way across the sandstone-flanked valleys. Baboons bark in the distance while black eagles and bearded vultures soar between the towering basalt cliffs. Abseiling, rock climbing and ice climbing in winter, are also popular, and safety is assured by the mountain rescue registers which need to be filled in at every entry point.

This is the hike to Cathedral Peak without the final push to the summit. The scenery was spectacular and the 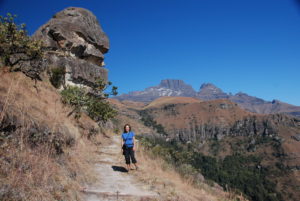 The Sphinx and Crystal Falls

A most beautiful walk. Two water refill spots (a stream and Crystal Falls) on the way. There is a shallow 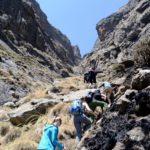 Park at the parking area below Thendele camp. After 7 km you will reach the Tugela “tunnel”, where overhanging rocks 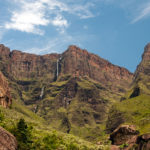 Amazing trail, best hike ever. Views were absolutely amazing for the entire hike. Trail is not well marked and requires