The Elephant Coast borders Mozambique in the north, Swaziland and the Lubombo Mountains in the north west, the Indian Ocean to the east and ends roughly at the mouth of the Imfolozi River near St Lucia village in the south.

The region is a paradise of natural wonders with an incredible 21 different ecosystems. In fact, there are few areas in Africa with such an incredible diversity of fresh water ecosystems. It is largely due to this, and the incredible sense of place, that a large portion of the Elephant Coast was declared a World Heritage Site, and named iSimangaliso Wetland Park. Broadly translated from the Zulu language, iSimangilso means ‘something miraculous’.

The coastal dune system that runs along this 220-kilometre stretch of protected coastline consists of vegetated linear dunes that are among the highest forested dunes in the world. They are estimated to be 25 000 years old and up to 180 metres high. Select coastal establishments, such as Thonga Beach Lodge and Rocktail Bay, take night tours along the stunning beaches to see the ancient phenomenon of nesting sea turtles.

Few areas in Africa have the incredible diversity of fresh water ecosystems found here. Major rivers wash through broad flood plains. Large coastal lagoons spill out into the ocean. Deep, clear coastal lakes sit just behind the massive dunes. When the small, semi-permanent pans fill up, visitors can still sometimes observe a traditional fish drive (fonya), which, along with the 700-year-old fish traps in Lake Kosi, are some of the unique features of this area. The lakes are home to hippo, crocodiles and a variety of fish.

There is a wide variety of flora, with well over 2 000 plant species, many of which are endemic to the region, and some of the most interesting and unique game reserves are found here in the Elephant Coast region. Incredible dense, evergreen forests with towering fig trees stand in a lush undergrowth of ferns and wild orchids that hang from the trees. Swamp forests contain massive raffia palms that are home to the rare, indigenous palm nut vulture and a variety of beautiful birds. Against the backdrop of the dunes, palm savannahs are dotted with wild date and ilala palms, from which locals brew the popular, traditional Njemane or palm wine.

Also special to the area, are the local traditions and ceremonies of the Tsonga people. In February is the Marula Festival. Marula beer is a local speciality and the festival is held to celebrate the end of the harvest season.

The area is steeped in history, both contemporary and ancient, and contains a number of paleontological sites of scientific importance, such as Border Cave, as well as many fossils.

The Elephant Coast is world famous for its game reserves, such as Tembe Elephant Park, home to some of Africa’s largest tuskers, Ndumo and Mkuze, famous for their birdlife and Phinda, a private reserve with its four luxury lodges.

There are excellent deep sea fishing and diving opportunities at Sodwana Bay, and great houseboats and tiger fishing on Jozini Dam. If you would like to receive a brochure on the Elephant Coast of KwaZulu-Natal, please send an email requesting one to [email protected].

Latest Listings on the Elephant Coast

Phumulani Lodge located on the breath-taking North Coast of KwaZulu-Natal. It is ideally nestled between nature reserves and the magnificent

Situated a mere four kilometres from Hluhluwe Town (and on the access road to Hluhluwe IMfolozi National Park), Ubizane Wildlife

Is an upper three star game lodge with various game including giraffe,buffalo etc.We offer self catering or full catering.We offer 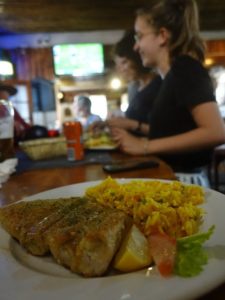